Not All Seaviews Are Created Equal – A Client’s Story

Master Wang Ke Jun is a millennial and first-class finance graduate. Over the past 3 years, he has taught and helped people to lead more healthy and dynamic lives by transforming the Feng Shui in their homes and workplace. He currently works with his Master at Art Of Eastern Science Academy – teaching and providing consultation services on Feng Shui.

Not All Seaviews Are Created Equal – A Client’s Story

One of the ways properties are often marketed is by highlighting the presence of an “Unblocked Seaview” from the unit’s windows.

Such seaviews will also result in such properties commanding a higher price.

In certain developments, it can even be the first few units to be sold out – despite a premium price tag being attached to such units.

In Feng Shui, there is even a certain belief that having a seaview could result in better prosperity for the occupants of such sea-facing units.

However the truth is not ALL of such units will automatically result in prosperity for the owner (or the occupants).

Recently I encountered a sad case about how a seaview unit resulted in various misfortunes for this occupant.

Location of this seaview unit

This couple moved into this HDB unit sometime back in 2004.

This meant the couple moved in around the start of Period 8. Their HDB unit was located at a high floor – with a seaview.

In their case, the seaview was located at the North-East area.

In Period 8, according to Ling Shen Zheng Shen theory, water cannot be located in the North-East direction.

Water in Feng Shui is a “yang” element and putting it in the NE sector creates an overwhelming inbalance that can disrupt the harmony.

The Negative Impact of Water in the NE

This couple consulted us in 2016 to find out if poor Feng Shui was the cause of their various misfortunes.

In this case, the wife was the one who received the worst impact.

Before they moved into the HDB unit, she used to be a successful insurance agent. However within a span of 5 years, her career deteriorated. She moved from insurance and became a property agent instead.

But there was no further improvement and her career and wealth continued to slide downwards. She went on to open up a hawker stall but that failed as well.

Eventually she stayed home to become a full-time homemaker.

When they eventually consulted us to give a Feng Shui audit of their home, we detected the possibility of cancer happening. This was based on her bed location and door location.

She confirmed it by saying that doctors had already removed 1 kidney as it swelled to 15 cm.

However that wasn’t enough to prevent the cancer from spreading.

Last year in 2017, she eventually passed away.

From a Feng Shui perspective, the water in the North-East caused the house to be riddled with financial troubles. This had a negative impact on her career – worsening year by year.

At the same time, cancer was brought upon her because of this 2 possible reasons:

In this case, the bedroom door Qi was a very strong water element – which weakened her metal element.

Perhaps if she had gone through regular medical checkups, the cancer could have been detected earlier and helped mitigate.

Not everything can be solved via Feng Shui as we still need to take into account the human behaviour which could have contributed.

If you believe that you might be affected since you moved into your current home, I advise you to contact me for a consultation session to confirm the cause.

We can check whether indeed your situation is Feng Shui related. 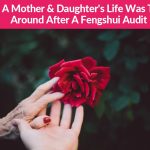 Feng Shui For Business – The Curious Fortunes of 2 Similar Restaurants